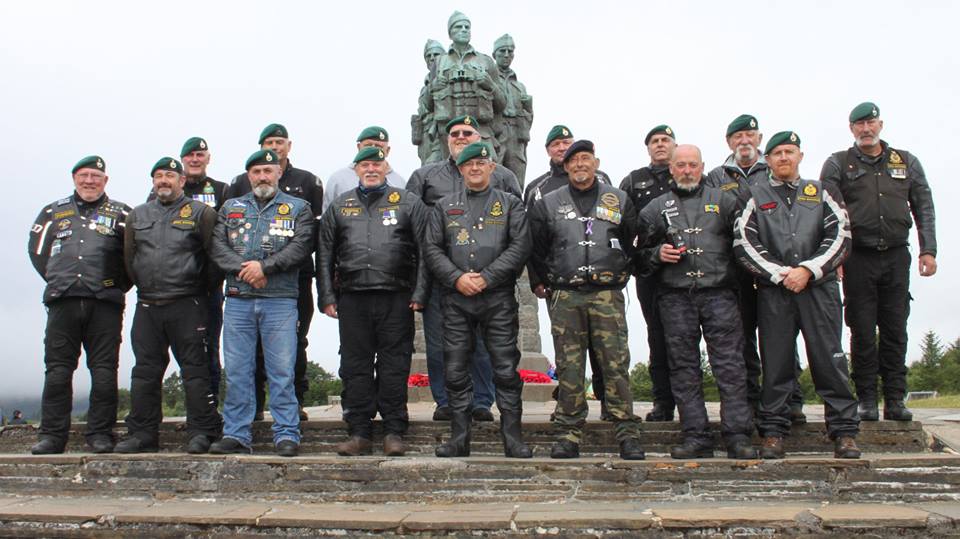 The Riders gathered at our Cheadle HQ on the Wednesday and we were treated to a pasta meal created by Caroline. The amount of food would have catered for a rifle troop and the few of us there managed to do it justice. After a few drinks and a catch up post Commando Pillion 18 (CP18) we got our heads down in preparation for the journey to the Roman Roads campsite the following day.

After a tidy up of the HQ in the morning we setoff led by Ride Master in Chief Si Capon for breakfast at the Yonderman café on the A623 near Wardlow Mires on the edge of the Peak District. John Panter joined us for breakfast on his supercharged Rocket but wasn’t intending to travel any further with us.  After breakfast we rode out North to join the Snake Pass and headed towards Glossop.

After leaving Glossop our local guide Russ led us through his boyhood backyard, Saddleworth Moor, Rochdale and the Pennines. Once over the Pennines we rode through the Yorkshire Dales passing through Skipton and up the B6265 and the B6160 to Aysgarth. We then continued to Hawes and Kirkby Stephen picking up the A66 to join the M6 at Penrith and onward to Carlisle and the Roman Roads camp site.  At the camp site we met up with a contingent of our Northern brothers for an evening meal and a few drinks at the local pub.

Friday morning began with a rain shower but it soon cleared and after a bacon banjo breakfast we set off across the Lowlands towards Edinburgh and the Forth Road Bridge. We kept to the A roads and crossed the Tay Road Bridge into Dundee then up the local roads to Arbroath with Paul Crosby leading the way. We booked into the transit accommodation at RM Condor and after a freshen up we took taxis into Arbroath for a social at the Abbey Inn. Our host for the evening was  landlord and RMA Rider Steve Millan who provided a very filling curry for everyone which was much appreciated after the long ride from Carlisle.

When we woke on Saturday morning, Condor was like a ghost town and I for one couldn’t find a cup of coffee anywhere so out with the bluey and brewed up by the side of the road. When everyone was ready we set off again to the Abbey Inn where we were treated to a bacon and sausage roll breakfast. With everyone refreshed we rode back to Condor and paid our respects in the 45 Commando RM memorial garden.

The journey to Roy Bridge, led once again by Paul, took us down to Perth and through Crieff to a tea stop at the Tullybannocher café, then through some beautiful countryside with twisty roads to the Green Welly café and fuel station. While taking on fuel and more refreshment we met up with a roving reporter from MCN who as well as knowing Si Capon, took a group photograph and published an article which appeared in week beginning 9th August… I think. Haven’t got a copy as yet but I have seen the article on Facebook. It was a long day so we opted to take a shorter route to our destination through Glencoe along the A82 to Fort William. The campsite a Roy Bridge is about 10 miles East and inland from Fort William. On arrival we quickly erected our tents, got showered and changed for a Dinner Dance with the RMA at the Ben Nevis Hotel. On Sunday morning after breakfast with everyone fully booted and spurred we set off for the Spean Bridge Memorial Service. Accompanied by a pipe band, the parade formed up with the Riders alongside the other RMA contingents and opposite a troop from 43 Commando RM. A line of Standard Bearers faced the Commando Memorial with Si Capon carrying the RMA Riders Standard. With the parade complete the Deputy Commandant General of the Royal Marines accompanied by the CO of 43 Commando RM and their RSM’s marched on and the 43 Commando padre conducted the service. During the service wreaths where laid by representatives of each contingent, the Riders wreath being laid by Ronnie Rankin. After the service the parade formed up for a march/ride past the DCGRM before dispersing in the memorial car park. Our Standard was carried by John Barker the pillion rider on Steve Millan’s Harley Davidson.

After a visit to the Spean Bridge garden of remembrance we rode back to the Ben Nevis Hotel for lunch and then back to Roy Bridge to park the bikes and have an afternoon session at The Stronlossit Inn.

We dispersed on Monday morning with the Rider going their separate ways home with exception of Steve Jary, Bob Stinton and Norman Wareing who planned to ride to Jon O’ Groats and around the North of Scotland to complete the trip